I find it quite interesting that we all still find comfort in ascribing to a particular aesthetic, whereas expanding your creative ‘world view’ by exploring differing aesthetics according to the situation isn’t necessarily dilettantism or lack of direction. On the other hand … I find the composers (and writers, and artists) I admire are often those who have mined a certain sensibility and honed and burnished their understanding within it – from Birtwistle to Bjork…. so who knows.

Of course all this is my way of avoiding the question.
Sometimes people have informed me that I’m a ‘soundscape composer’, which aggravates me a tad. Even so, a lot of my aesthetic is bound up in notions of place and landscape (geographical and internal ones) and I have, in the past although far less often now, used ‘field recordings’ and environmental sound. Primarily I’m interested in listening and sound, and the way that listening contributes to our understanding of the world and our selves. The way we come to terms with being alive. Sometimes through straightforward environmental concerns but, more often in my recent work (composing and writing), approaching listening, place and place making as a way of ‘thinking’, I guess. It’s easiest to recommend a piece I made that is about this, Making Place

My musical aesthetic right now is that I no longer think of myself as ‘a composer’ especially, really, but as a creative artist who works to integrate text (most often my own), music, sound, creative computing (I code a lot) on an equal footing or as required. Most of what I do has a digital component, but not always. Anyway… whatever it is, I’m still working at it.

Who are your main influences?

In terms of music? Not sure really – I like all kinds of stuff. Throughout my life composer colleagues and mentors have often inspired me hugely with their approach and/or their work, but I think only one composer has been essential to my thinking in a way that influences all I do, and that’s Bach. Bach is always there somewhere at the back of my mind, that contrapuntal accomplishment, complete mastery – I can’t really articulate how important playing Bach, at the piano, has been to me throughout my life.

So many things, who and what…. and where.
I’ve been inspired often by the places I’ve lived in and considering what they mean or can be metaphors for. I’m inspired right now by living in west Norfolk for the first time – often a wonderfully tenebrous mix of fog, flatness, dilapidated farms, loamy soil and windy, spacious skies. I was also inspired by five years living on an island off West Coast Canada, not only by the beauty of it all but by what it meant to live on an island and what an island can symbolise.

Tell us about the background of your piece – how did it come to be written and what’s it all about?

Xenia Pestova is going to be performing my Fuga Interna (begin) at the rarescale concert on 15th April 2015 – I’m thrilled at the beautiful performances and recording she has made. It’s the latest in an ongoing series of Fuga Interna pieces for piano, and all draw on Bach’s Fugue in B minor (WTC Book 1) – these are the only works I’ve written, or will write, that reference Bach’s music explicitly. Each piece also quotes all the pieces that came before it, often only for a moment. The listener doesn’t need to know or notice any of this at all – it’s a ‘secret obsession’ mostly. Xenia’s piece also uses a highly transformed version of Philip Mead’s recording of the first one in the series.

The text, written and spoken by me, is about learning the piano and memory, and specifically about memory loss and forgetting, and the ageing process. It’s an elegy – in part for my mum who was my first piano teacher. By a nice twist of fate, Philip taught Xenia the piano at one time.

While my mum is very much still around, she now has advanced Alzheimer’s – but she still remembers music, and while she can’t remember me too well, we sing along together happily.

What are your plans for the future?

Well, I’ve found that plans are never a good idea. But on my personal horizon are more pieces that integrate text and music – perhaps involving the performers more in making the text. I’ve just made a ‘walk’ for Paul Roe, a great clarinettist. He wrote me an informal emailed text about a favourite walk, and then I made an iPad app with highly interactive, ‘visual poetry’ text and also audio interaction, all manipulated by his live playing. Excited and nervous in equal parts about the premiere in Dublin, later in April.

What have been your career highlights so far?

Leaving full-time academia comes pretty much up there as something that benefited my creative work enormously, although I miss working with composers. I think that’s reflective of the sad state of academia in the UK and elsewhere though, not necessarily the recipe for happiness. A ‘career highlight’ that gave the impetus to keep on going as an experimental writer was winning the 2012 New Media Writing Prize, with an interactive piece, Window (www.novamara.com/window) – I’m not a fan of prizes, but it helped to boost my confidence. Basically I make stuff, and I hope that people will be interested enough in it to listen and, hopefully, enjoy it.

If you could sum your music up in three words, what would they be?

Katharine's website (links from there to soundcloud and academia.edu – for my writings about sound and music, and other things).

Screenshot from Katharine's latest work, Paul’s Walk, which will be premiered in Dublin in April. This is a ‘still’ from a live animation of the text, which is shaped and created by sonic activity. 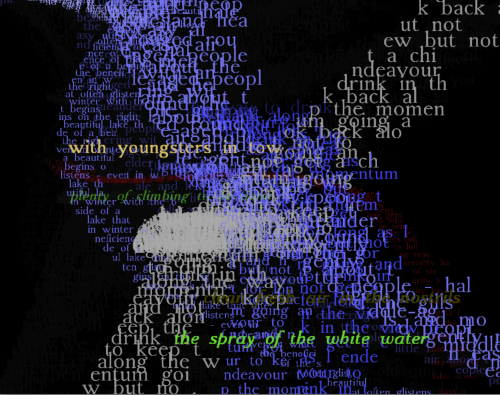